I'm not brave enough to go out and fight the crowds, so I've done my Black Friday shopping online.  Some of these sales were advertised a few days ago, so I could plan.  Today, I received a package that I ordered earlier in the week.  This is one of my purchases: 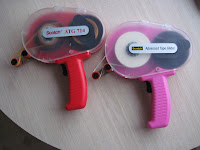 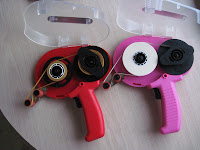 I already owned the red ATG 714 and love it, but I had to try the new pink one.  They appear to be the same, except for weight.  The red one is much heavier.  It was also much more expensive.  I think I paid over $50 for the red one a few months ago.  I just got the pink one for less than $19.  Since I use a lot of adhesive in card making, they will both get used a lot.  Time will tell which one I use the most.  The tape rolls look about the same, but I don't know if they are interchangeable.  I'll try that later.

I also placed an order to another company at 12:03 AM, because it was only a 9 hour sale that started at midnight.  That company had the rolls of tape for this gun at a lower price, so I ordered some more.  I also have some Spellbinders dies and a few other things on order.

This was a fun day, since we have lots of left-over turkey to eat.  I did all the cooking yesterday.  After this little break, I'm going to have to get back to making cards.  Lots of birthdays in December.  I also have Christmas cards to address and get mail.  I'll post some photos of the cards I've made in the next few days.
Posted by Velda at 4:52 PM