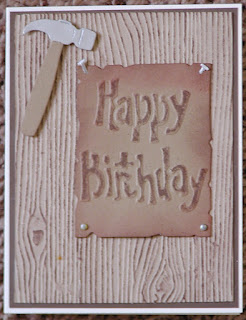 Since I was in a creative mood, I made a card for my son's upcoming birthday.  To create this card, I pulled out some very old, long unused supplies. 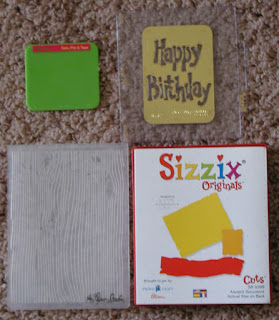 I used some tan cardstock and placed it in the wood grain embossing folder, then patted some Memento Rich Cocoa ink onto the raised areas.  Using the old original Sizzix die, I cut out an ancient document from the same cardstock.  I placed this die cut into a very old Sizzix Happy Birthday stencil.

If you've never seen these, they came before the embossing folders were invented.  The brass stencil was glued into a plastic folder and another piece of plastic, embossed with sentiment, is inside back of folder.  I then removed brass stencil from folder and used it to add color to raised letters.  I added some of same ink to edges of sign for the distressed look

The hammer and nails were cut with the small Sizzlet die.  I used both silver and brown paper.  I cut the handle from the brown paper and glued it on top of silver handle.  I then glued the brown hammer head under the silver head.  I placed the nails through small holes in the corners and glued the 'sign' onto the woodgrain paper.  I used tiny brads in the lower corners, with heads painted silver.  I attached the hammer onto card with foam tape to give it some dimension.

I added a dark brown frame and adhered it to a cream cardstock.

I have had a serious lack of mojo this winter.  Karen's challenge on Gingerwood Bulletin Board inspired me to make a bird card for her challenge. 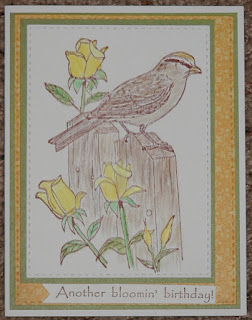 This stamp is unmounted with no name on it.  I used a Misti to stamp it onto the white cardstock.  I pulled out my neglected Prismacolor pencils and colored the image, then blended it with odorless mineral spirits.  My stamped outline was partly obliterated in the coloring process, so I put it back in the Misti and stamped it again with Memories Artprint Brown ink.  The Misti sure is nice for this purpose.  I cut out the image with my stitched rectangle dies and also cut the yellow paper with a larger size die.  I cut the green frames with my trimmer to give a narrow border.  This was mounted onto a white card base.  The image and the sentiment are mounted on dimensional tape.